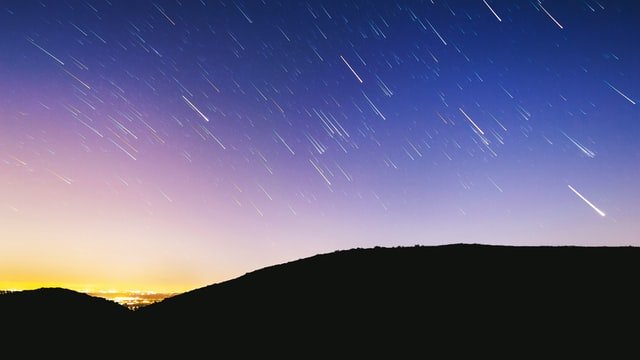 Meteor showers occur when the Earth passes through a field of cosmic debris.

As the debris crosses the atmosphere, it burns up, sometimes resulting in what we call shooting stars.

Since these chunks of rock or ice are gone forever, a meteor shower does lose some of its material every time it shows up.

But there are ways for a shower to be replenished, says David Meisel, executive director of the American Meteor Society. The Geminids, which appear every December, are fragments from an asteroid called 3200 Phaethon.

When 3200 Phaethon swings past the sun, it heats up and pieces break off, littering its orbit with fuel for shooting stars.

The asteroid has a diameter of three miles, which means it will take a long, long time for all its material to be exhausted.

Even if the asteroid or comet behind a meteor shower were to break apart altogether, it would still take tens of thousands of years for the dust to disperse.

A small portion would burn up in the Earth’s atmosphere, but most of the dust would collide with itself and spiral into the sun.

A meteor shower doesn’t have to run out of fuel to disappear.

The outer planets can tug a comet out of its natural periodicity, such that its debris may lie in Earth’s orbital path on one pass and not at all on the next.

Jenny Smith has been writing for clients for over four years. She is educated in family science and journalism which had given her a broad base from which to approach many topics. Jenny especially enjoys the outdoors and a well-written book, preferably combined.
Posts created: 10

After Hearing Rumors About New Home, This Man Made A Chilling Backyard Discovery